The SPLAT Project aims to prevent highway traffic from reducing populations of frogs and salamanders along Highway 4 on the west coast of Vancouver Island, B.C. Our blog is a way of sharing what we know (and don't know) about how to monitor and mitigate amphibian roadkill in our part of the world. We are keen to provide links to information from similar projects elsewhere.

Local volunteers started the SPLAT project in 2000 after noticing squished remains ("splats") of many frogs and salamanders during rainy nights.  After surveying the 40-km highway repeatedly, we identified the major concentration of "splats" within half a kilometer of a 4-ha wetland. Red-legged Frogs (Rana aurora), Pacific Treefrogs (Pseudacris regilla), Northwestern Salamanders (Ambystoma gracile) and Roughskin Newts (Taricha granulosa) breed in the wetland in late-winter and spring and then spend the rest of the year in the surrounding forests. Young of the year emerge from the wetlands in late summer. All ages risk becoming "splats" when they cross the highway to move between the breeding/rearing site and forest habitats.

Researchers and volunteers with the SPLAT Project have been moving live amphibians across Highway 4 over the past five years. We catch frogs and salamanders in pitfall traps along temporary plastic fences in three different locations. We are now working with the B.C. Ministry of Transportation to design an experimental amphibian tunnel at the location where we consistently catch the highest number of amphibians. A road survey, literature review and on-going discussion are all part of designing an appropriate tunnel. Future posts will describe this work and the actual installation process as it unfolds. 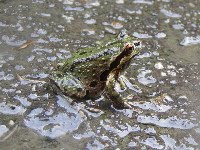 Association of Wetland Stewards for Clayoquot and Barkley Sounds
Our purpose is to promote awareness and stewardship of wetland ecosystems and their connections to surrounding lands and waters. Our blogs help us share what we're learning about how to monitor and mitigate threats to amphibians at all stages of their life cycle. Most of our focus is on protecting habitat for breeding, foraging, overwintering, dispersal and migration. We are keen to provide links to information from similar projects elsewhere. Please email us "wetlandstewards at gmail dot com" with your link.

We welcome your support

Similar Projects in Other Places